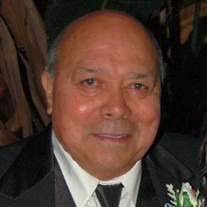 Albert Eddie Obrero, Sr., 77, passed away peacefully on Monday, October 25, 2021, at his home in Peoria. Albert was born to Felipe and Aurelia (Luna) Obrero in Los Angeles, CA. He married Melinda Gentry on May 10, 1996 in Chicago. Albert is survived by his wife Melinda of Peoria, children, Albert Obrero, Jr. (Cindy) of Walnut Creek, CA, Lorianne Stoehr (Bryan) of Morton, Felipe Obrero of Morton, and Aaron Obrero of Washington, step-daughter, Mindy Webster (Rick) of Metamora, grandchildren, Miranda, Kate, Victoria, Bradley, Alexander, Siddalee, Brody, and Emma, brother, Richard Obrero (Nancy) of San Clemente, CA, sister, Sylvia Ulibarri (Don) of Pico Rivera, CA, and several nieces and nephews. He was preceded in death by his parents, and one sister, Priscilla Miehm of Westwood, CA. After graduating high school in Los Angeles, CA, Albert enlisted in the United States Marine Corp, serving six years. There, he began to learn the plumbing trade which sparked his passion and launched him into a lifelong career of being a plumber. He owned and operated A.E. Obrero & Sons Plumbing business beginning in 1975 in Los Angeles, CA, and continued his business after moving to Peoria, IL. He was also a member of the Plumbers Local Union #63 in Peoria. He was known for always being a hard worker, very organized and a good businessman. He viewed plumbing as an art form which was reflected in how meticulously he sweated copper. His second passion was cooking for family and friends, along with enjoying fishing and listening to a variety of music. He will be remembered as quite the character and is already missed. Cremation rites have been accorded and a Celebration of Life will be held at a later date. Schmidt-Haller Burial & Cremation Services is assisting the family with arrangements and condolences may be left at www.SchmidtHaller.com.

Albert Eddie Obrero, Sr., 77, passed away peacefully on Monday, October 25, 2021, at his home in Peoria. Albert was born to Felipe and Aurelia (Luna) Obrero in Los Angeles, CA. He married Melinda Gentry on May 10, 1996 in Chicago. Albert is... View Obituary & Service Information

The family of Albert Eddie Obrero Sr. created this Life Tributes page to make it easy to share your memories.

Send flowers to the Obrero family.