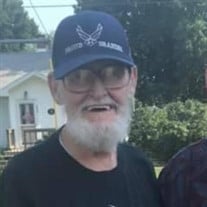 Benjamin Franklin “Benny” Harper, age 76, of Peoria Heights, passed away Friday, Sep. 11, 2020 at 7:25 p.m. at his residence. He was born Nov. 25, 1943 in Tulsa, OK to Leon and Mildred (Moore) Harper. He married Sharon Fisher on Oct. 6, 1962 in Galion OH. She passed away May 3, 2016 in Peoria. He was also preceded in death by his parents and one daughter, Dana I. Rogers. Survivors include one son, Chris (Lori) Harper of Lacon, two daughters: Stacy Harper of Mason City, IL, Shelli (John) Rickard of San Jose, IL, seven grandchildren: Michael, Skyler, Austin, Emily, Mason, Benett, Morgan, and one brother, William Harper of Canton. Benny worked as a Journeyman Molder for Cast Technologies in Peoria for almost 40 years retiring in 2009. He was a member of the Teamsters Local 974. He was an avid golfer. He also enjoyed building and racing dirt cars, camping, fishing, and traveling with his wife and best friends across the U.S. Cremation rites have been accorded and there will be no services at this time. Schmidt-Haller Burial and Cremation Services in Peoria is in charge of arrangements.

The family of Benjamin Franklin Harper created this Life Tributes page to make it easy to share your memories.

Send flowers to the Harper family.