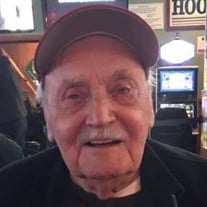 Bertie L. Bogard Sr, 89, of Washington, formerly of East Peoria, passed away on Tuesday, December 1, 2020 at OSF St. Francis Medical Center. He was born on July 1, 1931 in Blodgett, MO to Dallas S. and Bertha V. (Lawson) Bogard. He married Barbara Brinker on May 3, 1952 in Virginia Beach, VA. She preceded him in death on May 15, 2010 in East Peoria. He was also preceded by his parents, one son, Lee Bogard; three sisters and two brothers. Bertie is survived by three children, Pamela (Joe) Tanner of Goodfield, Kathy (David) Nelson of Peoria, and Marty Bogard (and his significant other, Bonnie) of Bartonville, daughter in law, Debi Bogard; 10 Grandchildren; twenty-one Great Grandchildren; and several nieces and nephews. Bertie had been the owner and operator of Bert Bogard Construction in East Peoria for many years, retiring in 1993. He was a member of Carpenter’s Local # 237 in East Peoria. He was an Army Veteran of the Korean War, and a member of the Deer Creek American Legion Post # 1276. He had attended the East Peoria Church of Christ. He was an avid Cardinals fan, and enjoyed woodworking, bowling, square dancing and playing in a Country & Western band. Bert’s family would like to thank, Dr. Jon Michel and the nursing staff at Supportive Living in Washington, for their excellent care of Bert. Cremation will be accorded. Burial of his urn and Military Honors will take place at 10:00 AM at Fondulac Cemetery in East Peoria on May 15, 2021. A light lunch will follow at the Deer Creek American Legion, 31473 American Legion Road, Deer Creek, IL 61733. Memorials may be made to the Multiple Sclerosis Association of America or the Deer Creek American Legion Post # 1276. On-line Condolences and tributes may be made at www.schmidthaller.com.

The family of Bertie Lee Bogard Sr created this Life Tributes page to make it easy to share your memories.

Send flowers to the Bogard family.