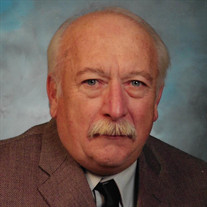 Daryl W. Somogyi, 75, of Peoria, passed away on Friday, April 29, 2022, at his home. Daryl was born December 11, 1946 in Peoria to John and Dorothy (Blackwell) Somogyi. He married Debra Ann Daw on November 14, 1970, and together they had six children: Melissa Hucal of West Peoria, Sara Somogyi of Peoria, Amy (Chris) Behm of Peoria, Matthew (Molly) Somogyi of Eagen, MN, Michael Somogyi of East Peoria, and Rebecca (Nick) Cox of Peoria. He is survived by his wife, all of his children, and five grandchildren: Mason, Max, Lucas, Micah and Avery, as well as his sister Cheryl (Bruce) Nyhlen of Grand Forks, ND, and sister-in-law Diane (Edward) Thomas of Elmhurst, IL. Daryl grew up in Peoria, attended Columbia School, von Steuben School, and graduated from Peoria Central High School in 1964. He attended Bradley University, University of Illinois, and served in the United States Navy from 1966-1970 with tours in Iceland, the Mediterranean and off the coast of Florida. He was trained as an electrician and advanced into computers as well. Upon leaving the Navy, he worked in computer hardware throughout his career, eventually retiring from the Bloomington Police Department in 2009 as their IT specialist. Daryl was very devoted to his family, serving on PTOs, coaching Little League teams, and grilling out for family gatherings. He additionally served as president of the Armstrong-Ellis Neighborhood Association for eight years. “PopPop” was best known by his family for his love of tinkering. He could build a computer from scratch, loved creating animation and making toys on his 3-D printer, and could stop a passing car in awe when he was running his self-built remote controlled lawn mower. There wasn’t anything he couldn’t fix, but his answer to most questions from his kids was, “Go ask your mother.” He offered a quiet strength, a gentle presence, and amazing intelligence. He will be deeply missed as our Patriarch. Cremation rites will be accorded. Memorials may be made to Peoria Area Food Bank. Special thanks to Unity Point Hospice services, and a very special thank you to Nurse Vetta King. Schmidt-Haller Burial and Cremation Services is in charge of arrangements.

The family of Daryl W. Somogyi created this Life Tributes page to make it easy to share your memories.

Send flowers to the Somogyi family.