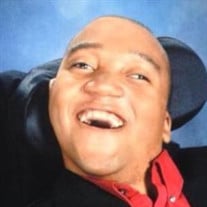 Demarco M. Woods, 34, of Morton, IL. passed away on Thursday, February 20, 2020 at Proctor Hospital in Peoria. He was born on June 25, 1985 in Peoria. Surviving to cherish Demarco’s memory are his father Raymond (Jittaun) Woods of Peoria, IL; his mother Mary Wright; his brother Lorenzo Wright and his sisters Marquita Woods and Ebony Wright, all of Decatur, IL. Preceding Demarco in death were his brothers Raymond James Woods and Erenest Wren. In March of 1997 Demarco became a part of Jim and Carla Hardesty’s family. Brian, Michael, and Naomi loved Demarco dearly. Matthew Brennan, also a beloved brother in this family proceeded Demarco in death. As a youngster Demarco attended Thomas Jefferson School followed by Rolling Acres Developmental Center in Peoria. In 1997 Demarco attended Bloomington Jr. High School for one year then attended Schramm Educational Center until he graduated in 2006. Demarco was admired by all of his educators and caregivers. He worked hard to please and accomplished well the goals that were set before him. After high school Demarco attended EPIC of Peoria, previously called PARC. He had many great friends and caregivers at EPIC. His family is so grateful for the dedicated staff that served Demarco in his day program for over 9 years. Due to Demarco’s disability he was privileged to move to Timber Ridge, Apostolic Christian LifePoints in Morton, July 1, 2014. This chapter of Demarco’s life has been beautifully supported with excellent care while living in a home filled with loving caregivers, nursing, and an administration that has worked hard to protect and meet Demarco’s every need. It has been such a blessing working with these dear ones that have surrounded Demarco with great care while praying regularly for his physical, emotional and spiritual needs. Demarco loved to attend church. Even though he was non-verbal, he would light up and vocalize enthusiastically every time he entered the doors of his church or when he heard the name of Jesus. He attended Park Meadows Baptist Church in Lincoln, IL, El Vista Baptist Church in Peoria IL, and the Apostolic Christian Church in Morton, IL. A memorial service will be held at El Vista Baptist Church 6301 North Syler, Peoria, IL. next Saturday, February 29. Visitation begins at 10:00am & the service at 11:00am. Memorial contributions may be made to Timber Ridge, Apostolic Christian LifePoints or El Vista Baptist Church.

Demarco M. Woods, 34, of Morton, IL. passed away on Thursday, February 20, 2020 at Proctor Hospital in Peoria. He was born on June 25, 1985 in Peoria. Surviving to cherish Demarco&#8217;s memory are his father Raymond (Jittaun) Woods of Peoria,... View Obituary & Service Information

The family of DeMarco Woods created this Life Tributes page to make it easy to share your memories.

Send flowers to the Woods family.