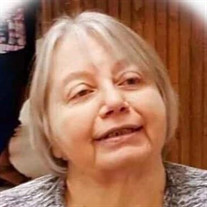 Diana L. Wood, age 69, of Peoria passed away at home in her sleep on January 24, 2021 with her Chihuahua, Lady, and cat, Oliver, by her side. She was born May 30, 1951 to Benjamin T. and Rena E. (Collins) Lusk in Peoria. She was preceded in death by her parents, an infant brother George, and her niece Christina “Pooch” (Simpson) Hamoum, who was incredibly important and dear to her. She is survived by her sisters Bonnie Simpson and Sandra Mosinski, son Ben (Laura) Lowery, grandsons Collin and Nate Lowery, and her nephews Roy Simpson Jr., John Simpson, Joey Simpson, and Steve Bruce. Diana graduated from Limestone Community High School in 1969 and soon after moved to Southern California for an adventure-filled summer. Her frequent change of address continued for much of her life. She spent time living in Cave-In-Rock, IL; Texas; Kentucky; and numerous towns throughout Central Illinois. Diana held a variety of jobs around Peoria, including a greenhouse laborer, KFC manager (she jokingly claimed fried chicken can cause pregnancy), counselor at Youth Farm, corrections officer at Illinois Youth Center in Hanna City, cashier at the Del-Van Theater, process server, sign language instructor for PARC, and finally a licensed practical nurse starting in 1997. As a nurse, she started work in nursing homes in Kentucky, Southern Illinois, and the Peoria area. Later, she provided nursing care to children in their homes, which she was extremely proud and passionate about. Diana was a devout atheist and vocal, life-long Democrat. She loved blonde coffee by the pot, and sharing long conversations with her best friend of over 60 years - Linda Jaynes. She had numerous fur babies over the years; she was never without a dog and sometimes had as many as eight. Diana also had many cats, a few chickens, a raccoon, and an ice-skating rooster. She was an avid gardener, specializing in: roses, tomatoes, and berries. Diana would say her single greatest achievement in life was raising her son. She worried more than she should have, and was often overprotective. Diana always emphasized the importance of a quality education and expected high academic achievement. Her parenting style was unconventional, but virtually any conversation was open for discussion. In the end, she loved Ben fiercely and wanted him to have a happy life more than anything. Diana was in a relationship with Scott Gallion until his passing in 2008. They enjoyed spirited debates about politics, reading the Sunday newspaper together, and making travel plans. They took a grand multi-week road trip that included: Niagara Falls, whale watching, wild blueberry picking, and detours through Canada. She declared it the “trip of a lifetime.” Unfortunately, they didn’t have enough time together to explore more destinations. A cancer diagnosis forced Diana to retire in 2012, but she prevailed over the disease. Unfortunately chronic diabetes and its associated co-conspirators took a toll on her body. In June 2019 her health dramatically declined. She had several stays in the hospital, rehabilitation, and moved in with her son’s family. In September of 2020 she grew tired of rural Princeville and isolation due to pandemic precautions. Diana decided one last change of address was needed. She wanted very much to be able to live back in her own home independently, and with the help and support of family and dear friends she was able to. She was enthusiastic about completing her vaccine, and was looking forward to being able to safely go back into public spaces. There will be no services and cremation has been accorded per her wishes. A portion of Diana’s remains will be placed next to Scott Gallion in Glendale Cemetery in Washington, IL at a later date. The family requests sending any memorial contributions to your local animal rescue/shelter.

The family of Diana L. Wood created this Life Tributes page to make it easy to share your memories.

Send flowers to the Wood family.