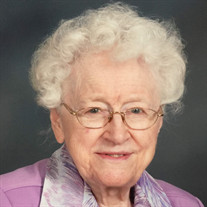 PEORIA - Florine B. Zimmermann, 98, of Peoria, Illinois, passed away at 3:10 p.m. on Tuesday, January 7, 2020, at the home of her son and daughter-in-law. She was born in Peoria, Illinois, on April 24, 1921, to Clarence and Alma Bessler Swadley. She married Eugene Zimmermann in Peoria on June 17, 1951, and he preceded her in death on February 13, 1999. Florine is survived by one son, Daniel (Lynn) Zimmermann of Peoria; one grandson, Adam Zimmermann of Peoria; one granddaughter, Amy (Christian) Kim of Pinehurst, North Carolina; two brothers-in-law, Harold (Rose) Marteness of Peoria and John (Loni) Zimmermann of Hemet, California; and one niece, Marilyn (Larry) Leman of Eureka, Illinois. She was also preceded in death by her parents; one brother, Leland (Mary) Swadley; one brother-in-law, Marion (Bernadine) Marteness; and one nephew, David Swadley. Florine worked at the Northern Regional Research Lab and Swan Lake Memory Gardens before becoming a dedicated homemaker. Although she was afflicted with polio at the age of two, and had great difficulty walking throughout her life, she always had a wonderful smile and positive attitude that influenced everyone she met. Florine’s family would like to thank the UnityPoint Hospice team for all of the kindness and compassion they showed to both Florine and her family. Florine was a member of Grace Presbyterian Church and belonged to His Alone Fellowship and the FTF Sunday School class. Funeral services will be at 11 a.m. Friday, January 10, at Grace Presbyterian Church, 8607 St. Rt. 91, Peoria, IL 61615, with Pastor John Hopwood officiating. Visitation will be one hour prior to the service. Burial will be in Swan Lake Memory Gardens. In lieu of flowers, memorials may be made to Grace Presbyterian Church or UnityPoint Hospice in Peoria.

The family of Florine B. Zimmermann created this Life Tributes page to make it easy to share your memories.

Send flowers to the Zimmermann family.