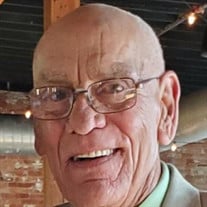 Peoria – George E. “Bud” Fulton, 79, of Peoria, passed away on Monday, March 29, 2021 at OSF St. Francis Medical Center in Peoria. He was born on May 14, 1941 in Farmington, a son of Everett “Jug” and Louise (Faletti) Fulton. Bud joined the United States Air Force and served from 1959 to 1963 as an aircraft mechanic. While stationed in Portland, OR, he met and married Deanna K. Dusky on December 14, 1961. They had three children together. Deanna passed away on June 19, 1969 in Oregon as a result of a vehicle accident. On November 3, 1979 he married Debra Turner in Peoria. She survives. Married for 41 years, Bud loved Deb and appreciated how much she loved all of her children and grandkids. Bud is also survived by his five children, Pamela (Gary) Davis and Kerry Fulton, both of Farmington, Cheryl Fulton O’Brien of Tomball, TX, and Matthew Fulton and Kyle Fulton, both of Peoria; seven grandchildren, Morgan (Luke) Fulton-Gorham, Taylor (Cayl) Champagne, Chandler May, Hanna Fulton, Josh Boseke, Christian O’Brien, and Remi Fulton; one great-granddaughter, Harlow May; and his special sister, Wanda Lee Hitchcock of Farmington. He was preceded in death by his parents; first wife, Deanna; and sister, Marcia Grzanich. Bud joined the Peoria Police Department in 1971. During his 22 year career, he was honored to have received the Police Officer of the Year Award, Combat Valor Award, Distinguished Service Award, Life Saving Award, and the American Legion Award. He retired on July 31, 1999. Bud loved the outdoors. His cabin and 16 acres on the Sangamon River was his heaven on earth. He loved fishing, especially for those big catfish on the Illinois River. He was an avid deer hunter with both the shotgun and the bow. He enjoyed mushroom hunting in the spring and fall. Bud loved to cook. The bigger the mess, the better the meal. Bud loved an audience and a couple of drinks, but… “Don’t let the door hit you in the ass”. Bud’s family was what he held most near and dear to his heart. He had a special love for his dog Lily who was his constant companion. Schmidt-Haller Burial & Cremation Services in Peoria is handling the cremation arrangements. Per Bud’s wishes, there will be no funeral. Instead he wanted a private family graveside service with a celebration of life gathering to be held at a later date. He was rather upset that he was going to miss it!!! In lieu of flowers, memorials may be left to the Greater Peoria Honor Flight at PO Box 5072 Peoria, IL 61601. Online condolences may be left for Bud’s family at www.schmidthaller.com.

The family of George E. "Bud" Fulton created this Life Tributes page to make it easy to share your memories.

Send flowers to the Fulton family.