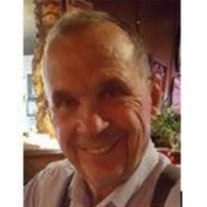 PEORIA- George Michael "Mike" Huddle, 85, of Peoria passed away on Friday, August 7, 2020 at OSF St. Francis Medical Center in Peoria. He was born on September 1, 1934 in Cincinnati, Ohio to Francis Gehrett and Edna Electa (Chambers) Huddle. He grew up on a farm in Stoutsville, Ohio. He married Cynthia Strohmeyer Huddle on September 15, 1956. She preceded him in death on January 3, 2014. He then married Cheryl (Riffey) Huddle on November 27,2015. She survives. Also surviving are children, Michael (Janet) Huddle of Minneapolis, Mark Huddle of Chicago, Karen (Earl) Pilgrim of Peoria and Kimberly (Paul) Scanlan of Hoffman Estates; grandchildren, Matthew (John), Elizabeth “Liz” (Alex), RJay, Erin, Anna, Sarah and Kenna; brother Tom (Nita) Huddle; and sisters Pat (Paul) Martin, Judy (Bill) Miller and Becky Huddle. He was preceded in death by his parents, first wife, brother Frank Huddle and sister Peggy Hunker. Mike graduated from The Ohio State University with a bachelor’s degree. After graduation he served in the U.S. Army from 1956-1958. He retired in 1993 from Continental Insurance where he was an insurance adjuster for 30 years. He was a member of First Baptist Church of Peoria where he served on many boards. He was also very active in his previous church in Dayton, Ohio. Mike loved The Ohio State University and was always singing the Buckeye Battle Cry. He loved baseball, especially the Cincinnati Reds and was a little league coach in Dayton when his boys were little. Cremation rites have been accorded. A private service was held on Sat., August 8th. Inurnment will be in Parkview Cemetery in Peoria at a later date. In lieu of flowers, memorial contributions may be made to First Baptist Church of Peoria. Schmidt-Haller Burial and Cremation Services is assisting the family. Online condolences may be made to www.SchmidtHaller.com

The family of George Michael "Mike" Huddle created this Life Tributes page to make it easy to share your memories.

Send flowers to the Huddle family.