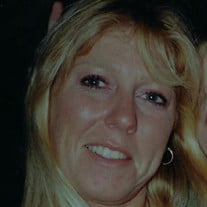 Giovanna Rivas (Roth), 53, of Bartonville, formerly of Peoria, passed away on May 9, 2020. She was born in Danville on April 12, 1967 to Charles and Beverly (Deck) Fast. She married the love of her life, Ricardo Rivas on August 6, 1993 in New Orleans, LA. He preceded her in death in 2012. Giovanna is survived by her mother, Beverly Fast; daughter, Britny (Paul Acevedo) Rivas; two sons, Shay Rivas and Kaden Rivas; several grandchildren; four step-sons, Jeff (Cori) Rivas of Morton, Rico and Carlos Rivas, both of Peoria, and Adam Rivas of Bartonville; two step-daughters, Stacey Rivas of Chicago and Brittany Rivas of Peoria; one brother, John Michael Davis of Noblesville, IN; four sisters, Cynthia (Joe) Boseman of Bradenton, FL, Lynne Davis-Johnson of Putnam, Terri Davis of Columbus, OH, and Kimberly Davis of East Peoria; and her significant other, Ronald Adams. She was also preceded in death by her father, Charlie Fast. She had worked for the I.A.T.S.E. Local #193 out of the Peoria Civic Center. Giovanna had a beautiful and sweet soul. She had a compassion and a warmth that was felt by everyone. Giovanna’s celebration of life gathering will take place at a later date.

The family of Giovanna K. Rivas created this Life Tributes page to make it easy to share your memories.

Send flowers to the Rivas family.