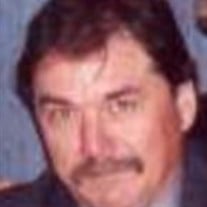 Gregory L. Shernak, Sr., age 63, passed away on January 9, 2022 at his home in Peoria. He was born on October 29, 1958 to Daniel L. and Patricia A. (Gudat) Shernak in Peoria, IL. He married Janet M. Blackmore in 1980, and later married Julie Yarbrough in 1995. Greg is survived by two sons, Gregory (William Talbert, Jr.) Shernak, Jr. of Bartonville, and Eric D. Shernak of Springfield, his father Daniel Shernak of Peoria, his grandson, Skyler Starcevich of Canton, his sister, Kathy Shernak of Hawaii, and two step-sisters, Jill (Kevin) Rose-Lopez of St. Charles, Missouri, and Michelle Kunkel-Freeman of Bartonville, nephew, Christopher Seiple of Maryland, and his beloved husky, Echo. He was preceded in death by his mother, his step-mother, Patti J. Shernak, and step-brother Kent Kunkel. Greg was a member of the Painters Union Local 157 and retired in 2008, last working for Houlihan and Associates. In his free time, Greg enjoyed hunting, fishing, and spending time with family and his dog. Cremation rites have been accorded, and a private graveside service will be held at Lutheran Cemetery, where he will be laid to rest near his beloved uncle, Vernon “Butch” Gudat. Memorials in Greg’s honor may be made to PCAPS. Schmidt-Haller Burial and Cremation Service is assisting the family with arrangements and condolences may be left at www.SchmidtHaller.com.

The family of Gregory L. Shernak Sr. created this Life Tributes page to make it easy to share your memories.

Send flowers to the Shernak family.