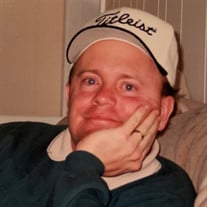 Gregory Lee Stalter, age 58 of Peoria Heights, passed away at 1:24 AM on Friday, June 25, 2021 at OSF St. Francis Medical Center in Peoria. He was born in Peoria on April 8, 1963 to William J. and Anna M. (Driscoll) Stalter. Greg graduated from Limestone Community High School and continued on to earn an Associate’s Degree in Computer Science from ICC and a Bachelor's Degree in Information Technology from Jacksonville University in Florida. Greg spent most of his working life in computer/information technology, working for Apple, Cisco, Clifton Gunderson, RSM US, Ameren, and Computerland. He also operated a networking equipment company, 4TECHGUYS, from 2012 until 2015. He was well known in the golf community, having competed and won numerous golf tournaments in Central Illinois. He was awarded the Best Youth Golfer award in the Peoria City Tournament in 1983. He was a member of the ICC golf team that went to the National Junior College Finals in 1983, and was an All-American golfer while at ICC. He received a full scholarship to play golf at Jacksonville University, in Jacksonville, FL. While there Greg developed a unique, and some would say funny-looking, golf swing that was one of a kind. His friends would attempt to mimic this swing, but Peanut was truly the only one to ever master it, and it was this swing that made him one of the best ball strikers in the area. He also owned a short game like none other. Peanut was a founding member of the River Cup Foundation, and a regular competitor in Championship Flight of the Peoria Men's City Tournament. In 1991 he was the Championship Flight runner-up. He won the Peoria Men’s 36-hole Stroke Play Championship in 1996. Greg was a great competitor and partner on the course, but always enjoyed the camaraderie of his friends and of those people he met through golf. He was preceded in death by his parents and one brother William P. (Pat) Stalter. Greg is survived by his son Jackson Stalter of Dunlap; one sister, Mary Ann Wilson of Peoria; three brothers, Richard (Debbie Howe) Stalter of Peoria, Daniel (Debbie) Stalter of Orlando, FL, and James (Paulette) Stalter of Germantown Hills; and many nieces, nephews, and cousins. It was Greg's wish to be cremated and a Celebration of Life will be held on Wednesday, July 7, 2021 at the East Peoria Boat Club, 707 Collins Lane, East Peoria, IL 61611, from 4:00-8:00 PM. Masks are optional for fully vaccinated guests. In lieu of flowers, memorials may be made to St. Thomas Church Food Pantry in Peoria Heights or any charity of the donor's choice. Funeral arrangements have been entrusted to Schmidt-Haller Burial and Cremation Services and online condolences may be left at www.SchmidtHaller.com.

Gregory Lee Stalter, age 58 of Peoria Heights, passed away at 1:24 AM on Friday, June 25, 2021 at OSF St. Francis Medical Center in Peoria. He was born in Peoria on April 8, 1963 to William J. and Anna M. (Driscoll) Stalter. Greg graduated from... View Obituary & Service Information

The family of Gregory L. Stalter created this Life Tributes page to make it easy to share your memories.

Gregory Lee Stalter, age 58 of Peoria Heights, passed away at...

Send flowers to the Stalter family.