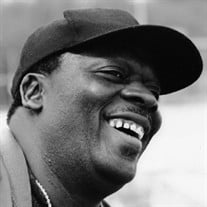 Peoria - Henry Calvin Bailey Jr., 75, of Peoria, passed away Thursday, June 17, 2021 at Richard L. Owens Hospice Home in Peoria. He was born March 20, 1946 in Cairo, IL to Henry and Elmer Mae (Ricks) Bailey. He married Lizzie Mae Randle on June 12, 1966 in Peoria, he later married Vickie Cottingham in 1976, and then married Bonnie Jo Davis on December 31, 1999. Surviving is his wife Bonnie of Peoria (Bonnie passed away on June 25, 2021); six children, Jacqueline (Randolph) Hamilton of Griffin, GA, Jerrick Smith of Oakland, CA, Calvin Keith Bailey of Avondale, AZ, Carmen V. Balentine of Metuchen, NJ, Jennifer N. Bailey of Peoria and Christopher B. (Renee) Bailey of Winter Haven, FL; a step-daughter, Wendy (Tim) Faber of Arvada, CO; one aunt, Jeanne Bailey; a first cousin, Amelia Nickels; 16 grandchildren, 6 great-grandchildren, 3 nieces and 3 nephews; long-time friend, Peggy Wise; and his two dogs, Sasha and Bo. He was preceded in death by his parents, and two brothers, Ray Bailey and Wayne Bailey Sr. Henry worked as a Marine Engineer under contract with the U.S. Navy until his retirement. He was a founding father of Illiopian Oracle, which was founded in 1962. He was an active member of Richwoods Christian Church in Peoria, where he served as a Missionary, a was on several church committees. Henry was a longtime Oakland Raiders Fan and was also a fan of all U of I college athletics. He loved spending time with his family, friends and his dogs, Bo and Sasha. Henry and Bonnie's memorial service will be at 10:30 a.m. Saturday, July 10, 2021 at Richwoods Christian Church. Their family is in charge of service arrangements. Schmidt-Haller Burial and Cremation Services is in charge of cremation arrangements. In lieu of flowers, memorials may be made to the George Washington Carver Center in Peoria.

The family of Henry Calvin Bailey Jr created this Life Tributes page to make it easy to share your memories.

Send flowers to the Bailey family.