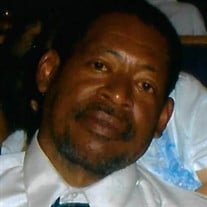 Peoria- Herbert Allen Griffin, Sr., 66 of Peoria, passed away on Friday, August 14, 2020 at Toulon Rehabilitation and Health Care Center in Toulon. He was born on May 3, 1954 in Shaw, Mississippi, a son of Virgil Allen and Juanita (McCorkle) Griffin. Herbert is survived by his eight children, Broderick (Emily) Lemon, Phoenix, AZ. Shameika Lemon, Tameika (Fred) Rudd, Marcus Griffin, Herbert (Amanda) Griffin Jr, Roderick (LaCreasha) Griffin, Vashawn (Mike) Young, and Canisha Lemon, all of Peoria. Many grandchildren and nine great-grandchildren. Three brothers, James White, and Gregory (Wendy) White, James Kimbrough, Carl (Crystal) White, Tyrone Brown. Nine sister- Bernice Griffin, Linda (Kevin) Griffin Rose, Doris Griffin, Patricia Griffin, Clair Gonzalez, Gloria (Andrew) Flatt Cynthia Griffin Marilyn (William) Bacon. Herbert was preceded in death by his Parents and his brother’s Freddie Bonner and Billy McCorkle, and sister Renea Griffin He had many jobs throughout his life, he enjoyed watching movies with his family and watching his kids play sports. He also enjoyed watching baseball. His favorite team was the St Louis Cardinals. Herbert’s celebration of life service will be at 10am 08/21/2020 at Faith Tabernacle Church, 3331 N. Finnell St. Peoria, IL 61604. His family is in charge of the service arrangements. Schmidt-Haller Burial and Cremation Services in Peoria is handling the cremation arrangements. Poem God looked around his garden And found an empty place, He then looked down upon the earth And saw your tired face. He put his arms around you And lifted you to rest. God’s Garden must be beautiful He always takes the best. He knew that you were suffering He knew you were in pain. He knew that you would never Get well on earth again. He saw the road was getting rough And the hills were hard to climb. So, he closed your weary eyelids And whispered, ‘Pease be thine’ It broke our hearts to lose you But you didn’t go alone, For part of us went with you The day God called you home.

Peoria- Herbert Allen Griffin, Sr., 66 of Peoria, passed away on Friday, August 14, 2020 at Toulon Rehabilitation and Health Care Center in Toulon. He was born on May 3, 1954 in Shaw, Mississippi, a son of Virgil Allen and Juanita (McCorkle)... View Obituary & Service Information

The family of Herbert Allen Griffin Sr. created this Life Tributes page to make it easy to share your memories.

Send flowers to the Griffin family.