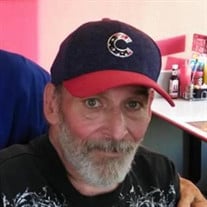 Howard A. Krueger, Jr., 67, of Peoria, passed away at his home on Wednesday, May 19, 2021. He was born on January 28, 1954 in Peoria to Georgia (McQueary) and Howard A. Krueger, Sr. He married Debbie Scurry on April 12, 1975 in Peoria. She survives. Also surviving are his sons, Howard Krueger, III, and Cody (Samantha) Krueger; granddaughters, Ella Krueger and Lennon Stevens-Krueger; grandsons, John Krueger and Howard Krueger IV (BJ); sisters, Diana Stumpf and JoAnn Hunt; brothers-in-law, John Scurry and Joe Scurry; nieces, Jodi (Chris) Vason, Chrissy Scurry and Cassie Scurry; and several other close family members. He was preceded in death by his parents; son, William Krueger; brothers-in-law, Joe Stumpf and Gary Hunt; and nephew, Joey Stumpf. Howard retired from Caterpillar as a Machine Operator. He enjoyed Chicago Bears football, Cubs baseball, Nascar, dirt track racing and cheering for his grandkids sports teams. Cremation has been accorded. A Celebration of Life will be held at a later date. Memorials may be made to Easterseals. Schmidt-Haller Burial and Cremation Services is in charge of arrangements.

The family of Howard A Krueger Jr. created this Life Tributes page to make it easy to share your memories.

Send flowers to the Krueger family.