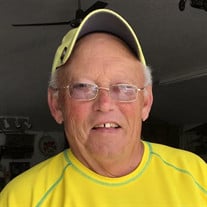 BARTONVILLE- Jack H. Miller, Jr., 71, of Bartonville passed away on Friday, May 14, 2021 at home. He was born on November 8, 1949 in Peoria to Jack H. and Mary Ellen (Abel) Miller Sr. He married Deborah Johnston on April 29, 1972 in Peoria. She survives. Also surviving are his two children, Cortlin (Shane) Meadows of Peoria and Curtis (Jackye) Miller of East Peoria; six grandchildren, Jessica Banks, Jaime Elkins, Madisyn Meadows, Tristyn Meadows, Kirstyn Miller and Jaxson Miller; three great-granddaughters, Mia, Esther and London; four great- grandsons, Brayden, Sebastian, Asher and Kyson; one great-grandchild on the way; one sister, Linda Lochbaum of Princeville; one sister in law, Rhonda (Jim) Hall of Lockport, IL; one brother in law, Archie (Debbie) Johnston of Claypool, IN; and many nieces and nephews. Jack was preceded in death by his parents; and brother in law, Denny Lochbaum. After serving in the United States Marine Corps, Jack worked at Caterpillar for 30 years as an engine tester. Jack retired from Cat in 2002 and started enjoying his winters in Florida with Debbie. Jack was an avid sports fan and loved to watch (and argue about) the Cubs and Bears. Through the years, Jack bowled, played softball, but most often enjoyed golf. Jack was also a proud member of the Peoria Elk’s Club, American Legion, and the VFW. For close to 30 years, Jack has lived with cancer. He dealt with multiple rounds of chemotherapy, radiation, and surgeries, but seemingly was indestructible. Through his fight with cancer, Jack was an incredible example of work ethic, toughness, and strength. Jack would often say that cancer would not kill him, and he was proven correct. Ultimately, his heart gave out and he passed peacefully. If you were lucky enough to know Jack, you had a loyal friend for life. The family would like to thank the incredible medical staffs that have supported Jack, specifically, Dr. Williamson at the VA and Dr. Le-Lindqwister at the Illinois Cancer Center. We would also like to thank Dr. James Bauer and Dr. John Kugler, whom both had role in Jack’s life. We’d also like to thank the member’s of the Elk’s Club that led to so many friendships. There are so many people to thank for the thoughts and prayers from the last few days. Per his wishes, cremation rites will be accorded. A memorial visitation will be held on Friday, May 21, 2021 from 1-3 p.m. at Schmidt-Haller Burial and Cremation Services, 1625 W. Candletree Dr. Suite D, Peoria, IL 61614. A celebration of life will be held also on Friday, May 21, 2021 starting at 5 p.m. at the Elks Lodge, 1 Elks Dr., Peoria, IL 61604. Memorial contributions may be made to Illinois CancerCare Foundation and/or the Bartonville Fire Department. Schmidt-Haller Burial and Cremation Services is assisting the family with arrangements and condolences may be left at www.schmidthaller.com

The family of Jack H. Miller Jr. created this Life Tributes page to make it easy to share your memories.

Send flowers to the Miller family.