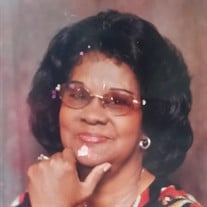 Joyce Marie Roston was born to Lehmon Gaynor and Pearlie B. Thigpen on August 1, 1940, in Tarboro N.C. She was the oldest of four children. When she graduated high school, she moved to Chicago IL where she met and married Ezell “Reggie” Roston after dating for only six months. Their union bore them four children, Gary, Debra, Kevin and Arneatrice Raquel. Later they adopted Phillip and Richard. She spent her life alongside her husband raising their children on the Southside of Chicago. For the most part, Joyce was a housewife. But from time to time, she worked part time jobs at clothing stores. Because of her profound sense of style, class, and beauty, she was sometimes used as a living mannequin in the store windows. Joyce loved, not only her children, but children in general. Especially the children in the neighborhood. Because of her love for children, this led her to go to school to become a nanny and to graduate top of her class which landed her a job as the nanny for the governor of Illinois, Governor Thompson. Joyce was an excellent homemaker, cook, and wife. Her family was her life, and they knew it. She also loved cooking and baking for all who entered her home. Many would probably agree that Joyce made the best donuts in town. She could have put Krispy Kreme out of business. In 1979, Joyce went to a convention of Jehovah's Witnesses with her mother in North Carolina. It was at this convention she was so impressed with the love that she observed that crossed all boundaries, that when she returned to Chicago, she began studying the Bible with Jehovah's Witnesses. In that same year, she dedicated her life to Jehovah. And symbolized her dedication by getting baptized. Although her children all studied the Bible with different individuals that helped to aid them into the truth, they all agree, it was their mother's conviction that Jehovah was the true God that led to their dedication to Jehovah, as well as their father's dedication to Jehovah. Joyce was married to her husband Reggie for 59 years until he preceded her in death two and a half years ago. It was at this time, due to dementia that she lived with her two older children at separate times. She was able to receive the love of not only her children, but from her grandchildren and great grandchildren. She would often say, how fortunate she was, and that she had a good life. A husband who took care of her all the way up until his death. Children who continued to care for her along with her grandchildren and even her great grandchildren would do what they could as young as they were. Even if it was just giving her big hugs and kisses and lots of sentiments such as “I love you grandma”. Joyce fell asleep in death on February 21, 2022, at home with her loved ones. She leaves to cherish her memory, her children, Gary, (Patrice) Debra, Kevin (Sharonda) Arneatrice Raquel (Darren) and Richard. Nine grandchildren, Darryl, Leslie, Ronneal, Kecia, Gary Jr. (Michelle), Tony (JaQuita), Arneatrice (Thomas), Trevis II, Shelby (Aaron). Ten great grandchildren. Her sisters, Hannah Holt and Janice Archer (Nino). Nieces and nephews. She will also be remembered by a host of other relatives, friends and spiritual brothers and sisters as she rests in the memory of her heavenly father Jehovah.

Joyce Marie Roston was born to Lehmon Gaynor and Pearlie B. Thigpen on August 1, 1940, in Tarboro N.C. She was the oldest of four children. When she graduated high school, she moved to Chicago IL where she met and married Ezell &#8220;Reggie&#8221;... View Obituary & Service Information

The family of Joyce Marie Roston created this Life Tributes page to make it easy to share your memories.

Joyce Marie Roston was born to Lehmon Gaynor and Pearlie B. Thigpen...

Send flowers to the Roston family.