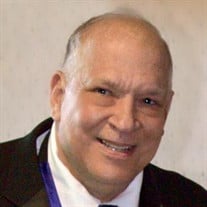 Lawrence E. Bickerman, Jr., 72, of Chillicothe, IL, passed away May 26, 2020. Born June 4, 1947 to Lawrence and Carrie (Dunn) Bickerman, he met the love of his life, Mary Jo Rowell, in typing class at Henry-Senachwine High School. They married July 25, 1970. What started off as a date at Pizza Cellar in Princeton, IL turned into a weekly tradition, every single Saturday for almost fifty years, often followed by trips to visit family. Following a fascination with vehicles from a young age, Larry learned auto body repair at Greer Institute in Chicago. He worked for Peoria Motors, Peter’s Automotive, Stoeker’s Service, and A-Plus Auto Body, retiring after more than four decades. In his spare time, he coached little league softball and baseball in Rome, IL. Larry was a devoted family man who will be deeply missed by his loving wife; three children, Courtney (Burliss) Pierce of Peoria, Renee Bickerman of Chillicothe, and Lawrence III, aka Loren, (Erika) Bickerman of Pekin, as well as five grandchildren, Calista Cuevas, Jaxon Cuevas Garceau, Easton Bickerman, Landon Bickerman, and Brooklynne Pierce. When asked, “Who is your favorite child?” He quickly replied, “None of them! My grandchildren are my favorite!” He was preceded in death by his parents and his brother James.

The family of Lawrence "Larry" E. Bickerman Jr. created this Life Tributes page to make it easy to share your memories.

Send flowers to the Bickerman family.