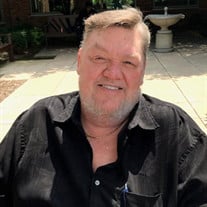 Lonnie Ray Meinders, 67, of Dunlap passed away Saturday, October 24, 2020, at his home surrounded by family after a long battle with cancer. Lonnie was born December 28, 1952 in Peoria. He married the love of his life, Jackilyn (Johnson) Huber on December 31, 1983 in Peoria. He is survived by his loving wife, Jackilyn; three daughters, Amy (Rick) Hutchison of Peoria, Ann (Tony) Coovert of East Peoria, and Allison (Eric) Herring of Peoria; son, Kevin (Kara) Huber of Dunlap; nine grandchildren; sister, Linda (Kenneth) Armstrong of Smithton; brother, Dennis (Carla) Meinders of Chillicothe, Mike (Deborah) Meinders of Princeville, and many others he referred to as “brother from another mother”; sister-in-law, Eleanor Jean Kane of Cambridge; several special nieces and nephews including his wingman, Mitchell Meinders and his couch buddy, Girley. Two brothers preceded him in death, Danny in 1982 and Fred in 2012. Lonnie attended Dunlap High School. He began working for Pabst Brewing Company in 1971 and worked there until it closed in 1981. In addition to working at Pabst, he started Meinders Power Vac Furnace Cleaning and Chimney Sweeping in 1978, retiring in 2001. As an entrepreneur, he was always looking to improve business eventually expanding to include lawn maintenance, snow plowing, pressure washing, and fire restoration. His business included residential, commercial and industrial cleaning. No job was too big or small. Lonnie would never ask his employees to do a job he would not do himself and never refused a job. His reputation was of the utmost importance to him and his handshake was golden. As a self-taught business man, he would advocate to friends and relatives to start their own business. He was always willing to share his honest opinion with no sugar coating. Lonnie was very proud he was able to help people get started in business. Many will remember his favorite sayings. “Winners never quit and quitters never win”, “Time is money”, “When the going gets tough, the tough get going”, “Lets Rock and Roll”. If someone were to say “I can’t”, Lonnie would reply, “What are the last four letters of American? Drop the “t” and say I can!” In the early 80’s he coined the phrase, “clean air ducts are like a breath of fresh air.” Lonnie will be remembered by his deep baritone voice with a big heart that was very caring and giving, the love for family ran deep. He had an infectious smile and laugh, loved joking and being the life of the party. Lonnie never met a stranger and never forgot a friend, or a face. He enjoyed dancing, playing pool, movies, motorcycle riding, boating, traveling, and his 1966 Ford convertible. In the later years watching the children fish, swim and enjoy the playground they built at their home became the highlight of his days. One of his biggest regrets Lonnie carried was not being able to serve in the military due to losing three toes during an accident as a teenager. He loved showing his foot to children and asking them to go look for his lost toes. Being very patriotic, Lonnie always displayed the American flag at everyplace he called home and encouraged others to do the same. On Veterans Day, he would visit American Legions in the area visiting with vets, buying them a drink and thanking them for their service. No services will be held at this time due to the Covid-19 Pandemic. A Celebration of Life will be held at a later date. Memorials may be made to Dunlap American Legion, St. Jude Children’s Hospital, or Toys for Tots. Schmidt-Haller Burial and Cremation Services is in charge of arrangements.

Lonnie Ray Meinders, 67, of Dunlap passed away Saturday, October 24, 2020, at his home surrounded by family after a long battle with cancer. Lonnie was born December 28, 1952 in Peoria. He married the love of his life, Jackilyn (Johnson) Huber... View Obituary & Service Information

The family of Lonnie Ray Meinders created this Life Tributes page to make it easy to share your memories.

Send flowers to the Meinders family.