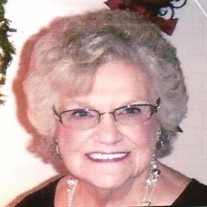 Norma Jean Schmidgall, age 95, passed away at her home in Peoria on Tuesday, April 19, 2022, surrounded by her loving family. She was born to the late George E. and Ada Mae (Benedict) Johnson on July 27, 1926 in Peoria. She married Earl Richard Schmidgall in Peoria and he preceded her in death on February 25, 2009. She was also preceded in death by her son, Gary Richard Schmidgall and his wife Patsy Darlene, grandchildren, Wendy (Dooley) Rybolt and Michael Thomason, brothers, Louie Johnson and Robert Johnson, and sisters, Alice Hagle, Doris Wiley, Juanita Hoppe, and Etta “Nioi” Grape. Norma is survived by her children, Sherry (Steve) Dooley of Peoria and Tarry (Sharon) Schmidgall of Peoria, grandchildren, Donny (Shirley) Richards of OK, Jodi (Scott) Thomason of Peoria, Chris Cole of AZ, Angie Thomason Donohue of Peoria, John Thomason of Peoria, Amy Thomason Schierer of Elmwood, Jeff (Tammy) Schmidgall of Farmington, and Kim Bowers of Peoria, 21 great-grandchildren, nine great-great-grandchildren, and many nieces, nephews, and extended family members. Throughout her life, Norma wore many hats. She worked for Pabst Brewery where she met her husband Earl, and then attended cosmetology school. She owned her own beauty shop and was also the manager of Beetler Beauty Service. Later in life, she worked for Jumer’s Castle Lodge. She was a lifelong member of Zion Evangelical Lutheran Church. Norma was known as “grandma” to many and opened her home to everyone. She was a fun grandma and enjoyed going to see her grandson Jeff play with his rock band and she watched her great-grandson Gunner race motorcycles as often as she could. She was a shoe fanatic and when she found a pair she liked, which was most of them, she bought them in every color. She was a regular BINGO player and seemed to win more often than not. Norma was naturally artistic and enjoyed ceramics, flower arranging, and interior design. While she spent much of her time caring for others, she also cared for herself, and was always put together. Most of all, Norma cherished the bond she had with her family and did her best to keep them close. Cremation rites have been accorded and a graveside service will be held at Lutheran Cemetery in West Peoria on Saturday, April 30, 2022 at 11:00 AM. Pastor Kara of Bethel Lutheran Church in Bartonville will officiate. Memorials may be made to Cystic Fibrosis Foundation Central/Western Oklahoma Chapter, Parker’s Pack. Schmidt-Haller Burial and Cremation Services is assisting the family with arrangements and condolences may be left at www.Schmidt-Haller.com.

Norma Jean Schmidgall, age 95, passed away at her home in Peoria on Tuesday, April 19, 2022, surrounded by her loving family. She was born to the late George E. and Ada Mae (Benedict) Johnson on July 27, 1926 in Peoria. She married Earl Richard... View Obituary & Service Information

The family of Norma Jean Schmidgall created this Life Tributes page to make it easy to share your memories.

Norma Jean Schmidgall, age 95, passed away at her home in Peoria...

Send flowers to the Schmidgall family.