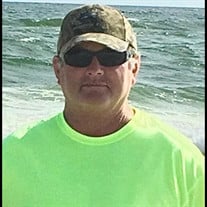 PEORIA- Paul J. Petrakis, 64, of Peoria, Illinois, passed away Tuesday, August 17, 2021, at OSF Saint Francis Medical Center. He was born on May 31, 1957, in Peoria to Bernard and Caryl (Kasebier) Petrakis Sr. He will be greatly missed by his fiancé, Marilyn Thompson, his daughters Stacey Guilfoyle and Brittany Thompson, his grandchildren Ashley Maloy, Ariana Maloy, Cheyenne Nelton, Karsen Bush, Karter Sayles, Jacksen Thompson, greatgrandchildren Graysen and Addison, siblings David (Barbara) Petrakis, Debra Johnigk, Gloria Schooley, Gayla (Mike) Wascher, Mari Doubet, Daniel Petrakis, Pete Petrakis, and numerous nieces and nephews. He was proceeded in death by his parents, two brothers, John Petrakis and Duane Petrakis, and two sisters, Janet Patton and Karen Petrakis. Paul was retired from Laborers Local Union 165 in Peoria. He enjoyed spending time with his family. He especially took great pride in his grandchildren. He doted on them and delighted in all their activities and accomplishments. Paul spent many years racing or helping his friends with their cars. Most recently though he kept busy at flea markets and auctions looking for items for his booth at Needful Things Antique Mall in Peoria. Paul was an incredible man who touched many people. He was the person everyone called when they needed anything. He was very giving of his time and talents. If you knew him, chances are he helped you with one thing or another along the way. He was an irreplaceable support system for his friends and family. Cremation Rites have been accorded. You may create an online condolence at www.schmidthaller.com for the Petrakis family. Memorials may be made to Easter Seals or St. Jude. A Celebration of Life will be at a later date.

PEORIA- Paul J. Petrakis, 64, of Peoria, Illinois, passed away Tuesday, August 17, 2021, at OSF Saint Francis Medical Center. He was born on May 31, 1957, in Peoria to Bernard and Caryl (Kasebier) Petrakis Sr. He will be greatly missed by his... View Obituary & Service Information

The family of Paul J Petrakis created this Life Tributes page to make it easy to share your memories.

Send flowers to the Petrakis family.