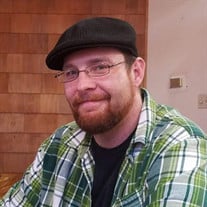 Robert Oliver Morefield II, age 39, of Peoria, IL passed away on Tuesday October 5, 2021. He was born to Robert Morefield and Carrie Markum on January 6, 1982 in Peoria. He is survived by his daughter Reilly Sage Young (19), daughter Kylie Rae Morefield (18), son Robert Oliver Morefield III (14), his father Bob (Elaine) Morefield of Ste Genevieve, MO, his brother Rusty (Summer) Morefield of Belleville, IL, his sister Misty (Derek) Weston of Bonne Terre, MO, and many nieces, nephews, cousins, aunts, and uncles who loved him dearly. He was preceded in death by his beloved mother Carrie Markum. Robert, also known as Robbie, Rob, and Bobbio, had an incredible smile and sense of humor. He was a caring, loving person who enjoyed helping those in need. He previously owned his own small engine repair business and worked as a manual laborer. He was recognized by his family and friends for his charm, quick wit, and his love for everyone. Hanging out with friends and family was one of his favorite past times. He enjoyed reading, especially Stephen King novels. He was an avid fan of the Pittsburg Steelers. He really enjoyed the family tradition of dirt track racing, and supporting his many family members who drove at the Speedway, especially his cousin Chris Morefield. He may not have lived society’s “perfect” life, but he did the best that he could. His family is proud of him and will miss him more than words can describe. He loved his children and lucky for us, the legacy of Robbie lives on through each of them. Services include a short memorial to be held Sunday October 10 at 2pm at Laramie Baptist Church located at 410 Lasalle Blvd, Marquette Heights, IL 61554 followed by family/friend fellowship with food at Dizzy Dean’s Bar and Grill at 4pm at 1101 W. Garfield Ave., Bartonville, IL 61607. Family asks that, in lieu of flowers, a collection will be taken for his children. All money donated will be split evenly between the three of them. Money can be given to Misty at the services on Sunday, mail checks to 3031 Easy St. Bonne Terre, MO 63628, or call/text 3095739498 to make additional arrangements.

Robert Oliver Morefield II, age 39, of Peoria, IL passed away on Tuesday October 5, 2021. He was born to Robert Morefield and Carrie Markum on January 6, 1982 in Peoria. He is survived by his daughter Reilly Sage Young (19), daughter Kylie Rae... View Obituary & Service Information

The family of Robert Oliver Morefield II created this Life Tributes page to make it easy to share your memories.

Send flowers to the Morefield family.