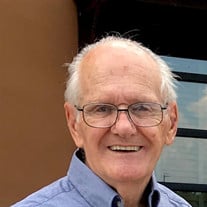 Robert W. Selby, 80, of Bartonville & Brimfield, IL, passed away peacefully at his home, 12:15 pm on Wednesday, October 30, 2019, with his family at his side. Born June 8, 1939 in Pekin, IL to Robert and Ilene Selby. He married Lona L. Kingsley, December 5th in Pekin, IL, more than 60 years ago. She survives along with two daughters, Sheryl (Mark) Barra of Peoria, IL and Trish Cheatham of Bartonville, IL. Also surviving are three grand-daughters, Amanda (Ryan) Rohn, Meghan (James) Kestel and Allyce Newby. Five great-grandchildren, Gabbie & Blayke Rohn, Bryce & Bryant Newby and Ilana Kestel. Siblings: JoAnn Golden of Las Vegas, NV; Nancy Patterson of Cape Girardeau, MO; Edith (Stan) Budyn of Topeka, IL; Ronald Selby of Peoria, IL and Kenneth (Pat) Selby of Godfrey, IL; in addition to many brothers-in-law, sisters-in-law and nieces and nephews. He was proceeded in death by his parents, Robert & Ilene Selby; one brother, Randy Selby; two sisters, Joyce Pherigo and Carol Morris. Bob worked at Allied Mills / Wayne Pet Foods & Specialty Plant, 1956 until Allied Mills closed their operation in 1988. He stayed on and progressed thru a change of hands numerous times and final facility closure in 1998. He began as a Freight Train Loader and advanced from many roles, including Foreman and in the end worked as Maintenance Supervisor. Several years later he worked at Wal-Mart Super Center on Allen Rd, Peoria, IL, for approximately 5 years. He loved time spent with his wife, children, grandchildren and great-grandchildren. He was many roles to many people, but his greatest joy was in being “PAPA”. They never missed an event pertaining to the grandchildren and until a few short months ago, they had never missed events of the great-grandchildren. He truly took his “Papa” role seriously and could often be found riding in the backseat, to ensure they were fully cared for. Prior to declining health, he thoroughly looked forward to every mile, when traveling to Kentucky and Indiana, to reunite with family members there. It was often said that he was a man of few words, but he valued any occasion to come together with his family and friends, and often reminisced of the many wonderful memories that had occurred over the years. Together, Bob and Lona operated Grandmother’s Love, (where the name was inspired by their three granddaughters). It was a woodworking business they began more than 25 years ago. They designed and sold many beautiful handcrafted items over the years, and met many wonderful friends, who were both customers and fellow craftsman. Schmidt-Haller Burial and Cremation assisted the family with cremation. A Celebration of Life / Memorial Service will take place on Saturday, November 9, 2019 at 1:00 pm. The service will be held at Bartonville Christian Church, located at 4900 W. Pfeiffer Road, Bartonville, IL. A dinner will be provided by Bartonville CWA and all Guests are invited to join the family for lunch, immediately following the service. Flowers can be sent to the church or Memorial Contributions may be made to either St. Jude – Team Bartonville or Bartonville Christian Church – “CWA”, in memory of Robert W. Selby.

The family of Robert W Selby created this Life Tributes page to make it easy to share your memories.

Send flowers to the Selby family.