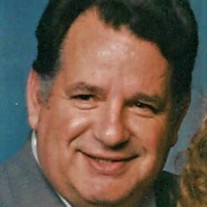 Robert “Bob” Martin Sibrel, age 86, passed away at 5:30PM on Wednesday, January 12, 2022 at OSF St. Francis Medical Center. Born on April 03, 1935 in Malvern, Kansas, he was the only child of Andrew and Ikey (Lafferty) Sibrel. He grew up in Rome, IL and shared countless good times with his childhood friend, “Joe Brown,” of Springfield. After receieving a degree in Aeronautical Engineering from the University of IL., he moved to California and worked for Douglas Aircraft. There he married Diana Demuth. In 1960, he returned to IL and worked for Caterpillar until his retirement in 1993. He was the father of 4 wonderful children, Paulette Sibrel, of East Peoria, Andy (Kacey) Sibrel, of Roxborough Park, CO, Chris Sibrel, of East Peoria, and Toni (Pete) Sibrel Bojan, of Grayslake, IL; grandfather of Jordan, Shannon, and Zakary. After his marriage to Terri Higgens Avila (she survives) in 1989, he became stepfather to Rob Avila, of Peoria; and step-grandfather to Gabriella Avila, of Washington, IL. In 2014, Bob was in critical condition and weeks away from hospice with heart problems. After many denials from hospitals, Prairie State in Springfield accepted Bob as they had been doing research with his illness. They did a never before done procedure using a new heart valve and a new surgery. Success, and he became the first in the US to have this done, and only the eighth in the world. This paved the way for others to follow. Those following years were a blessing. Bob enjoyed golf, poker, euchre, and was part owner of several pacer horses that raced in the IL area. He was easy going, kind, and forgiving, he loved life and always saw the positive side of it. He enjoyed old westerns, and his Mom’s friend chicken. His favorite songs were “Rhapsody in Blue,” by George Gershwin, and “At Last,” by Etta James. People warmed to Bob quickly, as he was a good listener and sincere. When he left this world, his mother, father, stepfather (George Hughes), and many relatives were there to show him around. Cremation rites have been accorded, and there will be no services at this time. Please, no donations, but buy something for yourself or for someone you care for. Bob would have wanted it that way. Schmidt-Haller Burial and Cremation Services is assisting the family and condolences may be left at www.Schmidt-Haller.com

The family of Robert Martin Sibrel created this Life Tributes page to make it easy to share your memories.

Send flowers to the Sibrel family.