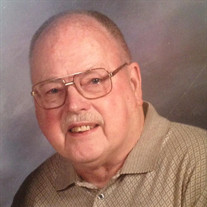 Rodney George Obourn, 81, of Peoria passed away at 11:53 am Thursday, May 16, 2019 at his residence. He was born December 30, 1937 in Ashton, IL the son of Glen and Alice Aschenbrenner Obourn. He married Irma Helen Hatfield on August 31, 1958. She preceded him in death on July 18, 1999. He later married Sharon Bevard on November 25, 2000. Rodney is survived by his wife of eighteen years; one daughter, Joanne (Mark) McKenzie of Oregon, WI; two sons, George (Debbie) Obourn of Melbourne, AR, and Roger (Kathy) Obourn of Washington, IL; two step-daughters, Michelle Sights of Smithfield, IL and Heidi (Chris) Aycock of Pinson, AL; one step-son, Brian (Shawn) Sights of Thayer, MO; six grandchildren and three step-grandchildren; four great-grandchildren; one brother, Greg (Linda Kaisher) Obourn of Rochelle, IL; and one sister, Glenda (Warren) Bunger of Rockford, IL. He was also preceded in death by his parents; one step-son, Rodney Sights; and one grandson, Army Specialist George Robert Obourn Jr. Rodney worked in Administrative Support at Bradley University until his retirement on September 14, 2001. He was an over fifty year member of First English Lutheran Church. Rodney had been a Scoutmaster for Troop 155 in Peoria for years. He was an avid railroad enthusiast. He loved to travel and be outdoors. Cremation rites have been accorded. A memorial service will be held at 11:00 am Thursday, May 23, 2019 at First English Lutheran Church in Peoria, IL. Pastor Ryan Anderson will officiate. Visitation will be one hour prior to services. Memorials may be made to his church. To view Rodney’s memorial page or to leave an online condolence please go to www.schmidthaller.com.

Rodney George Obourn, 81, of Peoria passed away at 11:53 am Thursday, May 16, 2019 at his residence. He was born December 30, 1937 in Ashton, IL the son of Glen and Alice Aschenbrenner Obourn. He married Irma Helen Hatfield on August 31,... View Obituary & Service Information

The family of Rodney George Obourn created this Life Tributes page to make it easy to share your memories.

Send flowers to the Obourn family.