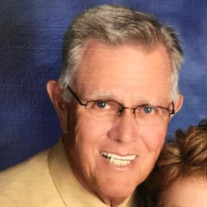 PEORIA- Ronald “Ron” L. Warfield, 78, of Peoria passed away on Thursday, August 5, 2021 at Manor Court. He was born on February 28,1943 in Canton to Howard D. and Betty Jane (Scott) Warfield. He married Margo A. Lenzi on December 26, 1964, in Farmington. She survives. Ron is also survived by two sons, Steven L. (Kristie Mueller) Warfield of Dunlap and Ronald Loren Warfield of Peoria, two grandchildren that were adopted by Ron and Margo, Dustin Warfield of Boynton Beach, FL, and April Warfield of Peoria, one great-grandson that was adopted by Ron and Margo, Landyn Warfield of Peoria, and one sister, Deborah Morse of Maquon, IL. They have 10 grandchildren and 6 great-grandchildren. He was preceded in death by his parents; one infant son, Anthony Lee Warfield; one daughter, Tammy Lee Shoen; three brothers, Richard, Michael, and Thomas Warfield; and one sister, Betty Louise Nighswonger. Ron went to Farmington High and then joined the Navy. Once he left active duty, he joined Caterpillar as a security guard for over 30 years until he retired. He also continued with the Navy Reserves and retired. During his work at Caterpillar, he worked up the ranks and became president of the local union for the guards. Eventually, he was the Regional Director, then Secretary/Treasurer of the United Plant Guard Workers of America (UPGWA). Ron was a very generous family man with a heart of gold, as evidenced by his adopting and raising of 2 grandchildren and currently 1 great-grandchild. Over his life, he enjoyed automobiles, motorcycling, fishing, hunting, boating, and bicycling. For many years he really enjoyed bicycling and would always speak to anyone that would listen on the benefits of a recumbent bike. He also loved watching his kids and grandkids play sports all the way from Little League baseball to college basketball. He was a member of St. Vincent De Paul Catholic Church. In lieu of flowers, the family wishes that memorial contributions may be made to St. Vincent De Paul Church. Per his wishes, cremation rites have been accorded. Burial services at Oak Ridge Cemetery, Farmington, IL., Tuesday, August 17th at 11am. Schmidt Haller Burial and Cremation Services is in charge of arrangements. Online condolences may be made to www.schmidthaller.com

The family of Ronald "Ron" L. Warfield created this Life Tributes page to make it easy to share your memories.

Send flowers to the Warfield family.