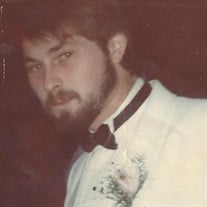 Russell P. “Rusty” Underwood, age 55, of East Peoria, passed away Friday, May 10, 2019 at 10:44 a.m. at OSF St Francis Medical Center in East Peoria after battling lung cancer for 6 months. He was born Oct. 18, 1963 in Tampa, FL to Pat and Janet (Cramer) Underwood. He married Becky Quell, the love of his life, on Sep. 13, 1996 in East Peoria. She survives along with his mother and step-father, Janet (Jerry) Berkley, step-mother, Karen Underwood, mother-in-law, Bev Quell, four sisters: Tracy (Rick) Bourlet, Kelly Lake, Michelle (Mark) Rohman, Tina (Mark) Junker, and one brother, Jeremy Berkley. He was Preceded in death by his father. Rusty was c/o owner of the Cooler Sports Bar in East Peoria with his uncle Roger. Rusty loved watching sports, especially the Chicago Bears. He will be remembered by his kind heart and outgoing personality. He never met a stranger or forgot a face. Rusty graduated from East Peoria in 1982 where he lettered in football and was named one of the outstanding seniors. The family would like to thank the class of ’82 for their recent kindness toward Rusty. Cremation rites have been accorded. Visitation will be Tuesday, May 14, 2019 from 4 to 7 p.m. at the First United Methodist Church in East Peoria. A celebration of Rusty’s life will be Wednesday at 11 a.m. at the First United Methodist Church in East Peoria with additional visitation ½ prior to the services. Schmidt-Haller Burial and Cremation Services in Peoria is in charge of arrangements. Memorials may be made to the American Cancer Society or the First United Methodist Church in East Peoria.

The family of Russell Paul Underwood created this Life Tributes page to make it easy to share your memories.

Send flowers to the Underwood family.