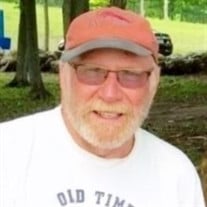 Thomas A. Weber, 69, of Bartonville, IL died at his home at 5:10 pm on December 7, 2020 surrounded by his family. Tom is survived by his wife Lisa (Stanbaugh) and 4 sons: Brandon (Katie Kelch) Weber of East Peoria; Chad Weber (Shannon Lipe) of East Peoria; Damon Weber (Kellie Siebert) of Gilberts, IL; and Aaron Weber of Peoria. He also leaves 3 stepchildren: Erica (Ryan) Fanning of Tremont; Jessica (Brian) Battles of Pekin; and Tim (Alison) Kerrn of Bloomington. He had 11 grandchildren: Braydon Weber , Makenna Weber, Trent Weber, Trey Weber, Nathan Weber, Aariana Weber, Nicholas Weber, Sophia Weber, Jase Fanning, Riley Battles, and Fisher Battles, all of whom he greatly loved. His parents, John and Wanda Weber of Peoria, preceded him in death. He is survived by 3 sisters and 1 brother: Sandra Weber of Peoria; Diane Robinson (Rick) of Creve Coeur; Patricia Johnson (Chip) of Peoria Heights; and Joseph Weber (Luanne Spiros) of Darien, IL; along with 4 nieces and nephews, Paul and Michael Baker, Amy Johnson, and Sarah Johnson Huenefeld. Tom was born on July 17, 1951 in Springfield, IL and moved with his family to Peoria in 1959 where he attended Holy Family Grade School and graduated from Bergan High School in 1969. After graduation, it was a toss-up whether he would become a veterinarian or a race car driver, as he loved animals and cars equally. He began working at Sealtest and Sieg Auto Parts, but wanting the freedom to set his own work hours so he could race sports cars, he opened his own garage, Weber Import Repair, on SW Adams in Peoria in the late 1970’s. Most weekends found him at a SCCA race track where his Dad and his indispensable roll of duct tape served as his 1-man pit crew. As racing expenses and family responsibilities grew, Tom gave up race car driving and focused on keeping Peoria’s import cars in good repair. After 10 years of running the garage with his faithful assistant, Teddy the Wonder Dog, Tom decided to lessen his work load by closing the shop and moving across the street to work at Morry’s Foreign Auto. He also worked part time as a bartender at several popular taverns including DJ’s and Marshal’s where he made many lifelong friends. In the late 1990’s the itch to once again have his own shop grew, so Tom and his new canine partner Cruiser reopened Weber Import Repair. He never failed to impress the owners of many of Peoria’s vintage and foreign sports cars with his expertise and mechanical ingenuity. He kept many a finicky Jaguar and Fiat humming along on Central Illinois roads long beyond their normal lifespans. In his spare time Tom enjoyed relaxing with friends and family; competing with and against his brother, sons, and brother-in-law in the Brothers Bowling Tournaments; and he never missed his annual camping trip to the Road America car races in Wisconsin where, for more than 40 years, he met up each summer with a lively gang of relatives and friends for a weekend of racing, cold beers, leaky tents, and late night laughs. After he closed the shop and retired, Tom spent his time tending to the mechanical ills of all of the vehicles belonging to his extended family, cultivating an impressively prolific vegetable garden, cheering on his beloved Philadelphia Flyers, and hanging out with his German Shepherds, Rena and Gretchen. A voracious reader all his life, Tom was a fount of knowledge on an endless variety of subjects, to the point where family members would regularly fight over who got to have him on their team at pub trivia nights. A quiet man with a tender heart and a delightfully dry sense of humor, Tom will always be remembered for his generosity and readiness to help others, his love for his dogs and all the world’s creatures, his resourcefulness at solving practical problems of any kind, and his ability to elicit great bursts of laughter with an unexpected comment or quip. He was very deeply loved and admired by his family and friends and will be very greatly missed. The family would like to thank Tom’s medical team at OSF St. Francis Medical Center for their dedicated care of Tom during his battle with lung cancer, and the attentive staff of OSF Hospice Services who provided such kind and compassionate care for Tom and his family in his final days. Cremation rites will be accorded with a Celebration of Life gathering at a later date. Online condolences may be made at www.schmidthaller.com. Memorial contributions in tribute to Tom may be made to St. Jude Children’s Research Hospital or to an animal rescue/shelter of your choice.

Thomas A. Weber, 69, of Bartonville, IL died at his home at 5:10 pm on December 7, 2020 surrounded by his family. Tom is survived by his wife Lisa (Stanbaugh) and 4 sons: Brandon (Katie Kelch) Weber of East Peoria; Chad Weber (Shannon Lipe)... View Obituary & Service Information

The family of Thomas A. Weber created this Life Tributes page to make it easy to share your memories.

Send flowers to the Weber family.