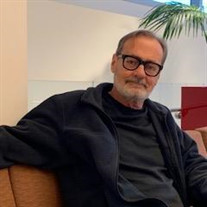 William E. Hill, 66, of Peoria, IL. passed away on Tuesday, February 25, 2020 at home, surrounded by family. He was born January 20, 1954 in Peoria to Melvin R. Hill and Anna M. Ashbaker Hill. Surviving to cherish Bill’s memory are significant other, Deb Golden, daughter, Samantha A. Hill, son, Mathew J. (Taylor) Hill, grandchildren, Sean William, Taylor, Jacob, Rodney, Nathan, William, Isabella, Joseph, Mathew Jr. Maggie who will arrive in June. He is also survived by special daughters, Natasha and Heather. Along with many nieces and nephews, Bill is survived by his “Awakening band family plus 1”, Kat, Andrea, Jeff, Laura and David. Preceding Bill in death were his parents, sister Harriet, brothers Michael, Raymond, and Randall. As a child, Bill attended Christ Lutheran School, where he felt safe and accepted. He truly loved being outdoors, made his own fishing poles and when thirsty, he would find a water hose in someone’s yard to catch a drink and keep going until time for dinner. Another passion he discovered at a young age was music and performing. At age 6 he would grease his hair back, put a dress shirt and vest on, to get in front of the TV to watch Joe Fenney on the Lawrence Welk show. After Christ Lutheran, he became a Woodruff Warrior, where his passion and talent for music thrived, thanks to a voice lessons from Mrs. Lauderbaugh. He performed in musicals, choir and truly loved the stage. After his time in the Navy, he had employment as a restaurant manager, cab driver and district 150 custodian, all to support his children. Through it all, he was one half of the Hill Brothers band. For over 40 years he and brother Randy, used their guitar skills and voices to perform secular top 40 music and so much more in numerous Peoria area venues. For the past 6 years, Bill has written and recorded Christian music, and built a Christian Band called Awakening, all who are members of Glen Oak Christian Church. Bill was diagnosed in late September 2019 with lung cancer, but kept up a fight to continue to write Christian music and to record it. The writing continued, but his voice faded before it was recorded. There will be a Celebration of Life at 11:00 am Saturday, February 29, 2020 at Glen Oak Christian Church. Visitation will be one hour prior to services. Rev Randy Williams will officiate. Memorials contributions may be made to the Music Ministry of Glen Oak Christian Church or Illinois Cancer Care Peoria. To view Bill’s memorial page or to leave an online condolence please go to www.schmidthaller.com.

The family of William Edward Hill created this Life Tributes page to make it easy to share your memories.

Send flowers to the Hill family.