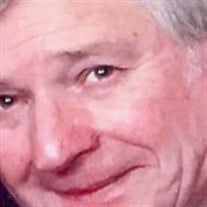 William Ray Nichoalds, 77, of Bartonville, passed away at 12:55 pm Sunday, November 17, 2019 at Farmington Country Manor. He was born in 1942 in El Paso, TX to his biological parents, Dominick and Lois Lucas Giacabazi. He later found his forever family with Glen O and Faye Hostetter Nichoalds. He married Edie Foley on September 30, 1972. She preceded him in death on August 4, 2007. He later married Sandy (Bontz) Ford on September 25, 2013. She also preceded him in death in 2018. William is survived by two daughters, Janine (John Katzianer) Nichoalds of Limington, ME and Jodi (Jim) Lindsay of Dunlap; two grandchildren, Edie Katzianer of Limington, ME and Brooklyn Lindsay of Dunlap; one sister, Penny Giacabazi; two brothers, Dominick Giacabazi and Mark Giacabazi; three cousins, Jamie Ragan, Jenna Noe, and Chris Curtis, including many other cousins, nieces and nephews. Bill was a member of the Ya-Yo’s, close friends who were like family. He was preceded in death by his parents, and one sister, Toni Laux. Bill graduated from Manual Training High School, where he ran cross country and was a champion roller-skater. He was a veteran of the United States Air Force. Bill worked at Caterpillar Tractor Company for thirty-five years. He was very active in the LGSA. He was also a member of Valley of Peoria Scottish Rite, Masonic Lodge, and American Legion Post 979 in Bartonville. Bill was also a member of The Legion of Honor for the Mohammed Shriner’s where he was the Director of Transportation to the Children’s Hospital. Bill attended St Peter Lutheran Church of Glasford. A Celebration of Life will be held on Sunday, December 8, 2019 at 2:00 pm at the American Legion in Bartonville. Cremation rites have been accorded. Memorials may be made to Alpha Park Library in Bartonville To view Bill’s memorial page or to leave an online condolence please go to www.schmidthaller.com.

William Ray Nichoalds, 77, of Bartonville, passed away at 12:55 pm Sunday, November 17, 2019 at Farmington Country Manor. He was born in 1942 in El Paso, TX to his biological parents, Dominick and Lois Lucas Giacabazi. He later found his... View Obituary & Service Information

The family of William Ray Nichoalds created this Life Tributes page to make it easy to share your memories.

Send flowers to the Nichoalds family.