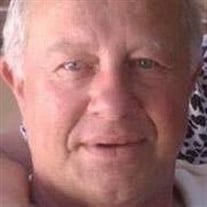 William “Bill” Gene Preston, 79, of Franklin, passed away on Monday, April 4, 2022 at 4:21 pm at OSF St. Francis Medical Center in Peoria. He was born on April 13, 1942 in Chester to George Andrew and Mildred Lillian (née Barker) Preston. William married Shirley Jo Jarrett of Cutler on July 23, 1963 at The Westminster Presbyterian Church in Sparta. Bill was a Born Again Christian of The Full Gospel Faith. He was a Vietnam War Veteran, he served his country as a Jet Engine Mechanic in the United States Air Force. He spent a full year, 1966 to 1967 at Ubon AFB, Thailand. He was a Life Member of The VFW Kaskaskia Post #3553 in Chester. He was employed at Spartan Printing Company, Sparta, in the Maintenance Department as a Machinist for 28 years. From 1968 until it’s closing in 1996. He is survived by his wife, Shirley Preston of Franklin; sons, John Preston of Franklin, Joseph Preston of Franklin, Jason Preston (Wilailuk “Ning”) of Parker, CO; grandchildren, Ryan Michael Hofmeister of Jacksonville, Kongbeang Watcharapilun of Parker, CO, Angelina Yalinda Preston of Parker, CO; sister, Sue (David “Butch”) Magers of Edinburgh; brother, Dennis (Rhonda) Preston formerly of Chester; two very special nieces, Stacy Decker and Barbara Reilley both of Holiday Shores; and many other nieces and nephews, he loved them all. Bill was preceded in death by his parents; one brother, Raymond (Doug) Preston; one sister, Shirley Mitchel; one daughter-in-law, Kathy (née Tingle) Preston; and one infant granddaughter, Rachael Lurleen Preston. Bill has been cremated and a memorial graveside service will be held at a later date at Cutler Cemetery in Cutler, IL.

The family of William Gene "Bill" Preston created this Life Tributes page to make it easy to share your memories.

Send flowers to the Preston family.