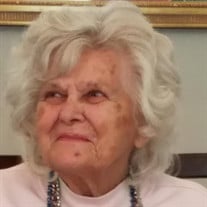 Yvonne Audrey Holzschuh, 96, of Peoria, passed on Tuesday December 22, 2020. She was born April 20, 1924, in Chicago and was adopted as an infant by Louis Holzschuh and Florence Holzschuh (nee Bailey). She graduated from Manual High School in Peoria. She worked for several years at LeTourneau in the payroll department. She was an accomplished pianist and accompanied the LeTourneau Chorus, which performed for USOs and traveled throughout the area. For many years, Audrey played the piano at various facilities around the Peoria area, including St Joseph’s Retirement Home, Mitchell’s Sanitarium, and the Children’s Unit at St. Francis Hospital, bringing joy to those residents. She also worked at the Peoria County Courthouse as a clerk/aide. During her time living in Florida, she worked at the Beach Club Hotel in Naples, where she had the opportunity to meet many famous people, including Mamie Eisenhower. She was an Avon representative from the early 1980s through 2016, and she earned a place in the President’s Club for ten of those years. She was a longtime member of Mount Olive Missionary Church and led Girl Scouts and Cub Scouts for her three children as they were growing up. Her incredible people skills and enthusiasm helped her become St. Jude’s (ALSAC) first head of volunteers for the Peoria fundraising effort in 1967-1968. That year, they raised more money for St. Jude than anywhere else in the United States. She had a deep love of family, music, Snoopy, and all things chocolate. She is survived by her daughter, Celeste Brown (nee Heck) of Oak Lawn, IL; her two sons, Gregory (Mary) Heck of Peoria, and Daniel (Cherry) Heck of Harmony, FL; her grandchildren Rachel (Justin) Rose (nee Heck) of Novato, CA, Shaina (Jay Popet) Heck of Flagler Beach, FL, Trevor (Sara Rausch) Heck of Orlando, FL, Cory Heck of Maitland, FL, and Rebecca Brown of Oak Lawn, IL; and many great grandchildren, nieces, nephews, cousins, and friends whom she considered family. She is preceded in death by her parents, her sister, Patricia Wyckoff, her ex-husband, Carl Heck, and her son, Michael. There will be a service held at a later date. Internment is private. In lieu of flowers, please consider donating to St. Jude Children’s Research Hospital at stjude.org or the Peoria Rescue Mission, which was co-founded by Audrey’s mother, at peoriarescue.org.

Yvonne Audrey Holzschuh, 96, of Peoria, passed on Tuesday December 22, 2020. She was born April 20, 1924, in Chicago and was adopted as an infant by Louis Holzschuh and Florence Holzschuh (nee Bailey). She graduated from Manual High School in... View Obituary & Service Information

The family of Yvonne Audrey Holzschuh created this Life Tributes page to make it easy to share your memories.

Send flowers to the Holzschuh family.